PhD Alejandro Ramos, one of the researchers involved in the development of technology for the automatic interpretation of data-2-text natural language used in Obsidian, has received three awards in recent months, one international and two at the national level. 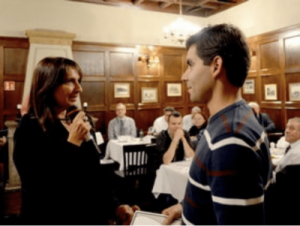 The most prestigious of them is the one granted by the European Society for Logic and Fuzzy Technologies (EUSFLAT). This anual recognition is awarded to the most outstanding doctoral work in Europe. As for Alejandro’s work, about the application of fuzzy logic for automatically generating data-2-text natural language, it has made it possible to incorporate fuzzy quantifiers to the data-2-text technology included in Obsidian in Spanish, English, Portuguese, French, and Catalan.

In order to “recognize research excellence within Europe in a broad sense”, the General Assembly of EUSFLAT approved in July 2011 the creation of the Best PhD Thesis Award. Since then, only 5 new doctors have received this recognition, awarded every two years.

On November 13, in Warsaw, Alejandro Ramos received the award from the president of EUSFLAT, Gabriella Pasi. She highlighted Alejandro’s contributions to the application of fuzzy logic techniques to the automatic generation of natural language.

Alejandro Ramos, three awards in one year for his contribution to data-2-text

Alejandro Ramos has also received awards from the Scientific Information Society of Spain (SCIE) and the BBVA Foundation.

In the first edition of the Research Awards granted by the SCIE and the BBVA Foundation, six prizes were awarded to young researchers for their contributions to Spanish scientific and technological development. These awards “recognize the creativity, originality and excellence” of young researchers. According to the sponsors of the event the prizes “intend to serve as a stimulus for them to continue with their research work”.

If you want more information about Obsidian 3.0 or other features of our platform, please contact us via the attached form.

NOTE Only professional e-mail addresses are accepted. Requests from gmail, yahoo, hotmail, etc. accounts will not be processed.

The personal data collected via the form will be used to process your request. You may exercise your rights of access, rectification and cancellation by writing to Obsidian Soft, calle Méndez Álvaro, 20 · 18045 · Madrid.

Are you looking for an Obsidian partner in your area?